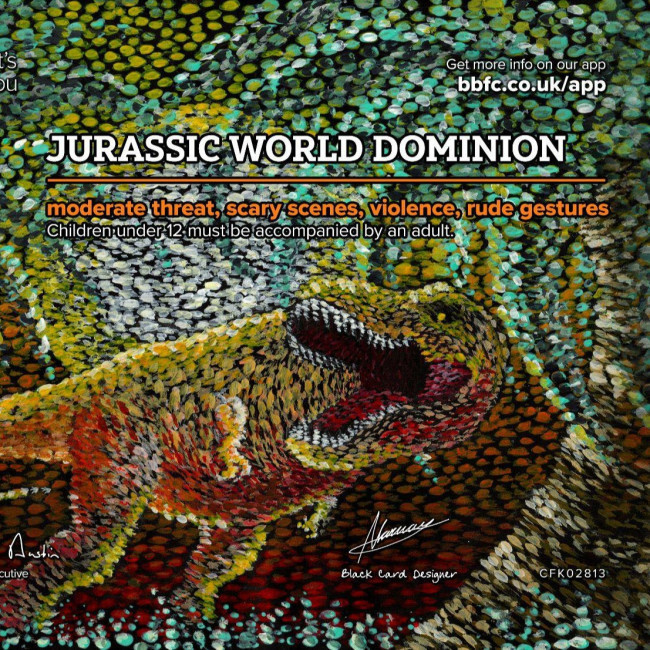 Bryce Dallas Howard has announced the winner of a Create The Card competition for 'Jurassic World Dominion'.

The British Board of Film Classification (BBFC), in collaboration with Universal Pictures, held a nationwide search for a talented young person to design the official BBFC Black Card for the new dinosaur blockbuster.

1,100 entries were submitted by pupils aged 12-16 across England, Scotland, Wales and Northern Ireland with the jury featuring panellists from the BBFC and Universal Pictures. The entries were assessed on their originality, creativity and relevance to the 'Jurassic World' franchise.

Bryce selected Aaron Larway, from The Wirral, as the winner of the competition in an exclusive video with co-star Chris Pratt.

She said: "There were so many stunning submissions to choose from, but one design stood out from the rest, congratulations on being a part of cinematic history. Thank you for your vision, creativity, and to everyone who submitted their designs."

Aaron said: "My love of both the prehistoric era and 'Jurassic World' was the main source of inspiration behind my Black Card design, as I watched all of the 'Jurassic Park' movies when I was younger.

"I've always wanted a reason to paint a dinosaur and this competition gave me a reason to do so, which has been so fun.

"The style I painted in was drawn from the work of Paul Signac who I have been studying for my art project and who I really like. I chose his style as it felt the most expressive to me and I could adapt it to my own preference of colours without compromising his technique and aesthetic."

Aaron's design will be displayed at every UK cinema screening of 'Jurassic World Dominion'.