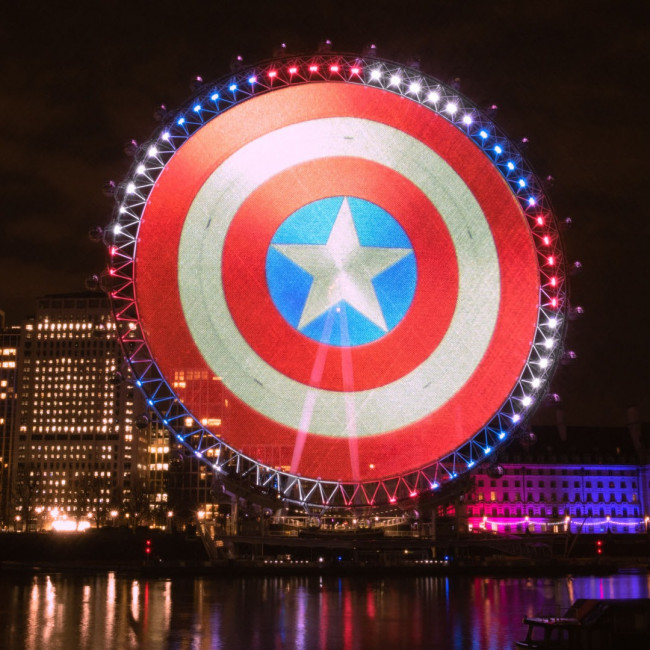 Captain America's iconic shield has been projected onto the London Eye.

The legendary Marvel shield appeared on the London landmark to celebrate the launch of the highly-anticipated Disney + series 'The Falcon and the Winter Soldier' on Friday (19.03.21).

The shield has also been spotted on several landmarks across the globe through the power of projection mapping. The shield has been seen on the Singapore Flyer, Asia's largest observation wheel, the Melbourne Star in Australia and the Luneur 1953 Flywheel in Rome, Italy.

The superhero shield was also projected onto La Grande Roue de Marseille in France, MAAG Hall in Zurich, Switzerland, the Torre Latino in Mexico City and the Planetario in Buenos Aires, Argentina.

'The Falcon and The Winter Soldier' stars Anthony Mackie as Sam Wilson/ Falcon – who was handed Captain America's shield in 'Avengers: Endgame' by Steve Rodgers (Chris Evans), and Sebastian Stan as Bucky Barnes/ The Winter Soldier. The pair team up on a global adventure that tests their abilities – and their patience.

The show will explore what happened after the events of 'Avengers: Endgame' and Mackie has previously hinted at surprises for his character.

The 42-year-old actor said: "When we finished 'Endgame' I had a meeting with Marvel where they laid out the future of my character and how he would fit into the universe, and it was something unexpected."