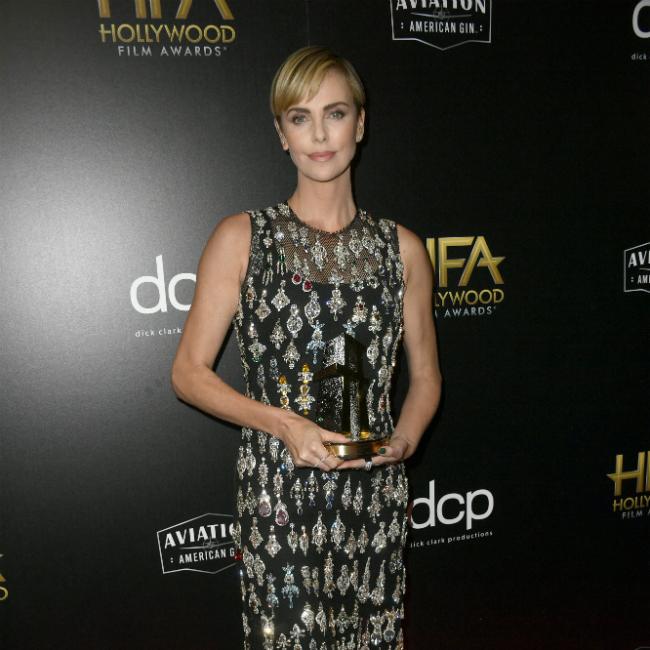 Charlize Theron says her role in 2003 movie 'Monster' changed her life forever, as she picked up the Hollywood Career Achievement Award at the Hollywood Film Awards.

The 44-year-old star was presented with the prize by Nicole Kidman - who won the same accolade at last year's event - at The Beverly Hilton Hotel in Beverly Hills, California, on Sunday night (03.11.19), and admitted her role as serial killer Aileen Wuornos in the motion picture was a huge moment in her career.

She told 'Entertainment Tonight': "I mean, it's hard - they really are like your children.

"But I think 'Monster' was definitely a moment in my career where I realised the opportunity that I was given was a chance to show that I was capable of more and it did change my career.

"After that, I didn't have to fight so hard for those interesting parts anymore, and more opportunities came my way to get outside of my comfort zone and do things that were maybe not expected for me.

"I think from that moment on, I built a career that has kind of defined what I really wanted my career to be -- not typecast, not stereotypical roles, but to really do things that are interesting and challenges the psyche of how we look at people."

Other big winners on the night included movie 'The Irishman', which picked up three prizes.

One of the film's big stars, Al Pacino, took home the Supporting Actor accolade at the ceremony, and he thanked his co-star Robert De Niro for helping him secure the role of Jimmy Hoffa with director Martin Scorsese.

Recalling how he got the part, he told the audience: "Bob said, 'How about Al as Hoffa?' And Marty said 'Yeah, OK. Is he OK?'

"And Bob said, 'He's a sweetheart.' So I didn't have to audition. They gave me the part. I like being called a sweetheart. So Bob got me the role in 'The Irishman'."

The Irishman's Emma Tillinger Koskoff took home the Hollywood Producer Award, and Pablo Helman won the Visual Effects gong for his work on the movie.

Elsewhere, Antonio Banderas was presented with the Hollywood Actor Award by his step-daughter Dakota Johnson - whose mother is Melanie Griffith, who Banderas was married to from 1996 to 2015 - for his role in 'Pain and Glory'.

And she said growing up with him was the "most fun" she could've had.

Referring to his 'Shrek 2' role as Puss in Boots, she said: "It was the most fun a kid could have.

"We had 'Shrek' swag coming out of our ears. We loved every second of it."

He said: "She still calls me Papi, And I love that, you have no idea.

"We had 20 years of family life that was beautiful, but the best is still to come."

Hollywood Song Award: Pharrell Williams, 'Letter to My Godfather', from The Black Godfather