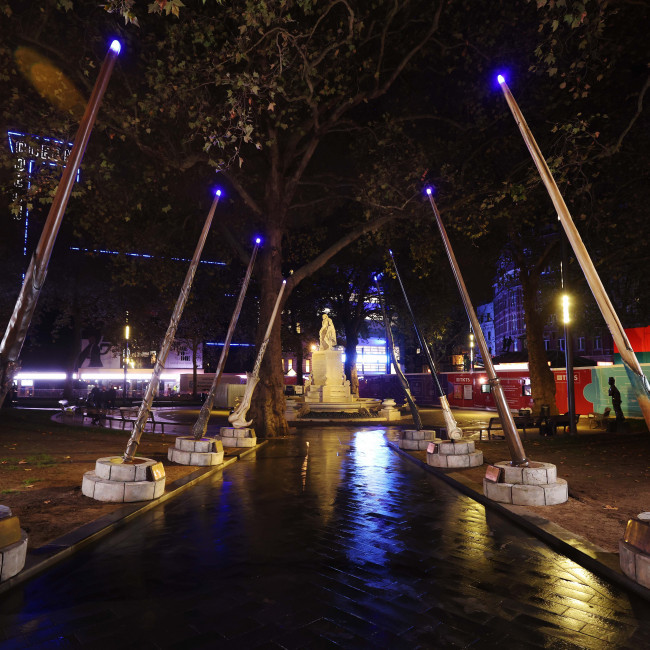 A breathtaking installation of giant wands have been unveiled to mark 20 years of the 'Harry Potter' film franchise.

The wands are exact replicas of those belonging to nine beloved characters from the 'Harry Potter' and 'Fantastic Beasts' films and have been unveiled in Leicester Square in London, the site of the premiere for 'Harry Potter and the Philosopher's Stone' in 2001.

The installation was revealed with a dynamic wand training class from Paul Harris, who worked as a wand choreographer on the 'Harry Potter' films, for children from a local school.

The nine wands will be illuminated from 6pm to 8.35pm every evening from today (13.10.21) until October 25 and form part of the Inside Out Festival – which brings art, entertainment and culture to Westminster.

The 20th anniversary of the 'Harry Potter' film franchise will be marked on November 16 and will be celebrated with special screenings in cinemas across the UK and Ireland.

The installation will then tour four cities in Britain in the lead-up to the release of 'Fantastic Beasts: The Secrets of Dumbledore' in April 2022.

Following a nationwide vote on the wands' next destinations, Hull, Stoke, Reading and Birmingham will each display the wands for a week from March onwards.

Polly Cochrane, Country Manager UK and Ireland at Warner Bros., said: "It is so exciting to have the Wizarding World Wands brought back to London and we are thrilled to celebrate the 20th anniversary of 'Harry Potter and the Philosopher's Stone' being released in UK cinemas."