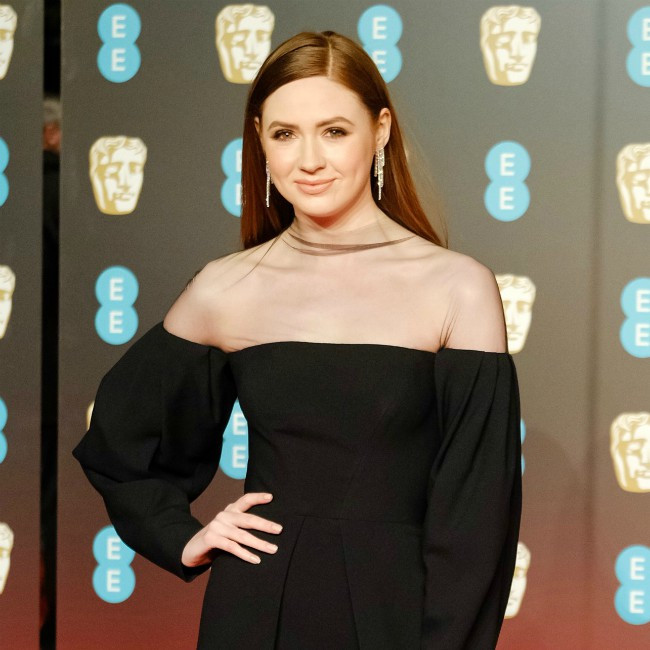 The 33-year-old actress can currently be seen playing Sam, a hitwoman who needs the help of her estranged assassin mother (Lena Headey) and her associates after she betrays the crime syndicate who trained her, in the Netflix movie and with a second film already in development, the Scottish star would love to see the 'Devil Wears Prada' legend on the set alongside her.

She said: "It's got to be Meryl Streep. I mean, it's Meryl. Could you imagine Meryl in a fight sequence? It would be so epic. Just with a huge weapon. Come on, Meryl!"

However, Karen admitted she was "pretty starstruck" by her castmates on 'Gunpower Milkshake', which as well as Lena included Angela Bassett, Carla Gugino and Michelle Yeoh.

She told 'Entertainment Tonight': "I was pretty starstruck, to be honest. I was trying to like play it cool but thinking, 'Oh my god, I'm surrounded by legends. How am I meant to behave in the presence of legends? I don't know!'"

The movie stepped up the action scenes Karen's already been involved with in the 'Guardians of the Galaxy' and 'Jumanji' films and she was proud of her performance.

She said: "The first 'Guardians' film, I'd never fought in my life and they put me through the ringer with the training.

"By the time I came out of that film, I was a bit better and then it just got better with each film. So, this one feels like I've finally graduated to something that is action-worthy. And I'm pleased with it. It was difficult, but I think all of that past training had been leading up to this."

And she joked she's now more than ready to reprise her role as Nebula in 'Guardians of the Galaxy 3'.

She quipped: "I'll be like, 'I don't need any rehearsal, just roll."

Karen can next be seen making an appearance as Nebula in 'Thor: Love and Thunder' and she had a great time working under director Taika Waititi.

She said: "It's chaos in the best possible way. He's like a mad professor that runs around and just says, 'Say this, do this, camera there, go!' And you're like, 'I'm just going to go with this.' There's something so freeing about that.'"