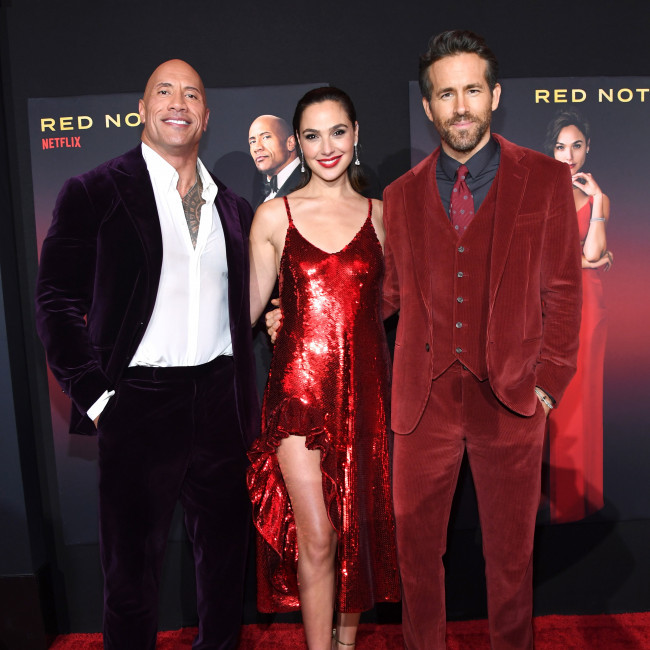 Netflix are planning to make two sequels to 'Red Notice'.

Dwayne 'The Rock' Johnson, Gal Gadot and Ryan Reynolds are set to return for the two movies, which are set to be filmed back-to-back.

Rawson Marshall Thurber is expected to return as director with Netflix reportedly hoping to start production in early 2023 given the busy schedules of the stars involved.

The producers on 'Red Notice'- who include The Rock, Hiram Garcia and Dany Garcia of Seven Bucks Productions – are all expected to come back for the next two films.

'Red Notice' proved to be phenomenally successful when it was released on Netflix last year and became the most-watched movie within 28 days of launching on the streaming platform.

The Rock previously shared a clip from the movie with his Instagram followers as he celebrated the positive response to the project – which was the top film on the streaming service in 93 countries and was watched for a whopping 277.9 million hours.

He captioned a clip from the movie on Instagram: "Here’s my slick talkin’ frenemy @vancityreynolds and I, giving you a taste of why RED NOTICE has officially become THE BIGGEST MOVIE IN THE HISTORY OF NETFLIX!!!

"In under two weeks, we’ve shattered all records and we have many weeks to go.

"THANK YOU GUYS and enjoy RED NOTICE this weekend around the world. (sic)"

Dwayne previously heaped praise on Netflix and described them as ideal collaborators for the unique movie.

The 49-year-old star said: "With 'Red Notice,' our goal at Seven Bucks Productions was to break down traditional barriers and create a true global event for the audience. Netflix has illustrated that they are the perfect partners to accomplish this goal."