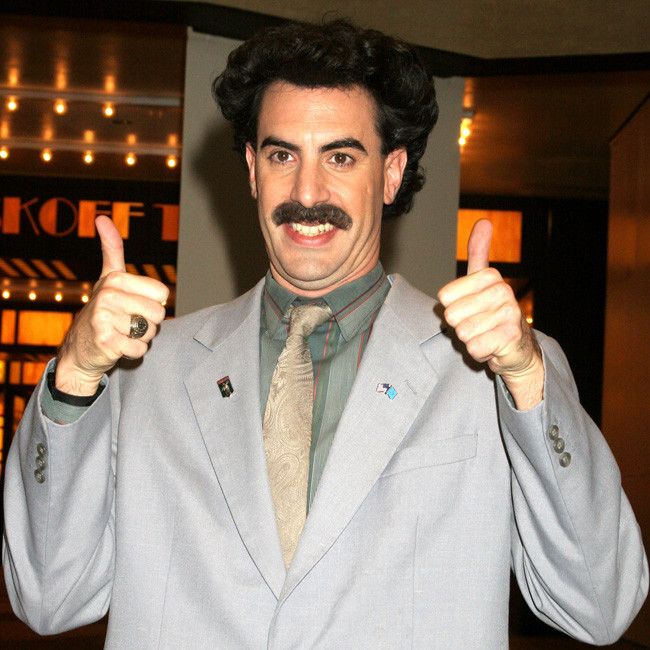 The 49-year-old actor reprised his role as the titular Kazakh reporter Borat Sagdiyev for 'Borat Subsequent Moviefilm', and went to great lengths disguise himself by dressing up as President Donald Trump.

Appearing on 'The Ellen DeGeneres Show' on Monday (02.11.20), he recalled how he spent "five hours hiding in the men's bathroom in CPAC listening to conservative men go to the toilet" in February.

He then quipped: "I would say Stephen Miller, if you're watching this, you need more fibre in your diet - it shouldn't take that long!"

Cohen also recalled how "terrified" he was when he went through security to enter the conference and made up he had a pacemaker when he set off the beepers.

He said: "I was terrified, obviously, the moment they touch my body — it's a fat suit.

"So I wouldn't have been allowed in."

The beep went off again lower down, but fortunately the security staff assumed it was the wire to the pacemaker.

Borat was there to offer up his daughter to Vice President Mike Pence for the scene in the movie.

Meanwhile, Cohen recently shared how he feared for his life when he turned up to a gun-rights rally whilst filming the sequel to 2006's 'Borat: Cultural Learnings of America for Make Benefit Glorious Nation of Kazakhstan'.

He shared: "While filming my latest 'Borat' film, I showed up as a right-wing singer at a gun-rights rally in Washington State. When organisers finally stormed the stage, I rushed to a nearby get-away vehicle."

However, Cohen's attempts to leave were thwarted by an angry crowd who "started pounding on the vehicle with their fists".

The comedian added: "Under my overalls, I was wearing a bulletproof vest, but it felt inadequate with some people outside toting semiautomatic weapons. When someone ripped open the door to drag me out, I used my entire body weight to pull the door back shut until our vehicle manoeuvred free."