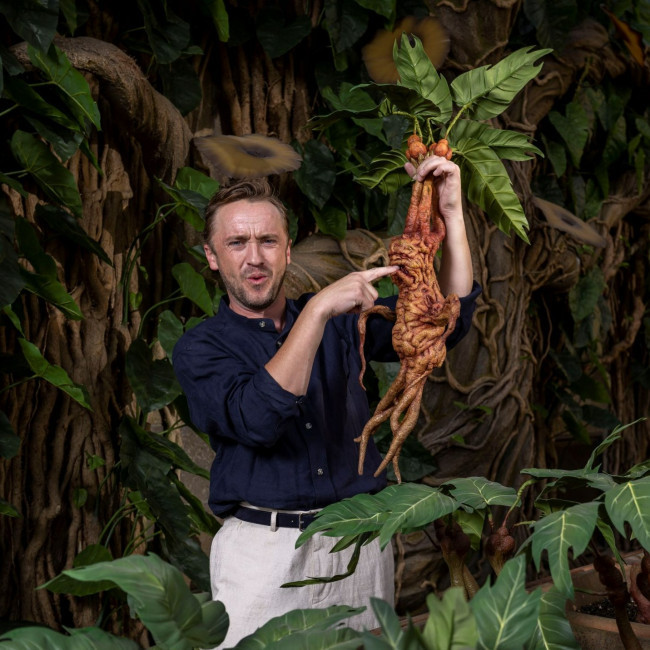 Tom Felton used to get “told off a lot” for laughing during ‘Harry Potter’ filming.

The 34-year-old actor – who portrayed Draco Malfoy in the wizarding franchise – took a trip down memory lane on Tuesday (21.06.22) when he revealed Professor Sprout’s Greenhouse at the Warner Bros. Studio Tour London – The Making of Harry Potter and he admitted returning to the set after so long was very exciting.

Reminiscing about shooting the movies, he said as he showed off the expansion on Instagram: “It’s been over 20 years since I first walked into this building, when I was literally 12 years old, as a young Draco.

“Welcome to Professor Sprout’s greenhouse, I’m very excited. Painstakingly recreated from when I was here 20 years ago.

“This is the first time I’ve walked in here, about an hour ago, for 20-odd years. I auditioned about 500 metres away.”

The actor admitted one of his favourite things about filming with his co-stars from Slytherin house was the fact they were allowed to “muck about” so often.

He said: “Much like being here, just being allowed to muck about. Broke the rules endlessly and were allowed to get away with it.”

Tom was blown away by how perfectly the set he had filmed on has been recreated.

He continued: “It’s actually unbelievable how exactly similar it is to when we were here.

“You wouldn’t have seen this when you watch the films but the detail, under the desks, over the desks, every bit of detail is put together with huge amounts of time, patience and love.

“There was very little acting done from us because we were just reacting to all the stuff in front of us.”

Professor Sprout’s Greenhouse is part of a new feature at the attraction titled ‘Mandrakes and Magical Creatures’, and visitors will get to step into the shoes of a Hogwarts student by pulling out one of the potted screeching plants as part of the interactive display.

The greenhouse is a permanent addition to the Studio Tour and will open as part of the new feature on 1 July.

As part of the ‘Mandrakes and Magical Creatures’ feature – which runs until 12 September 2022 – the Great Hall will be dressed for the Frog Choir scene from ‘Harry Potter and the Prisoner of Azkaban’.

Exterior sets are also to be expanded, with new additions including the fountain from the Hogwarts courtyard and a scaled version of the Weasleys’ home, The Burrow, which will both join the greenhouse in being permanent additions to the tour.