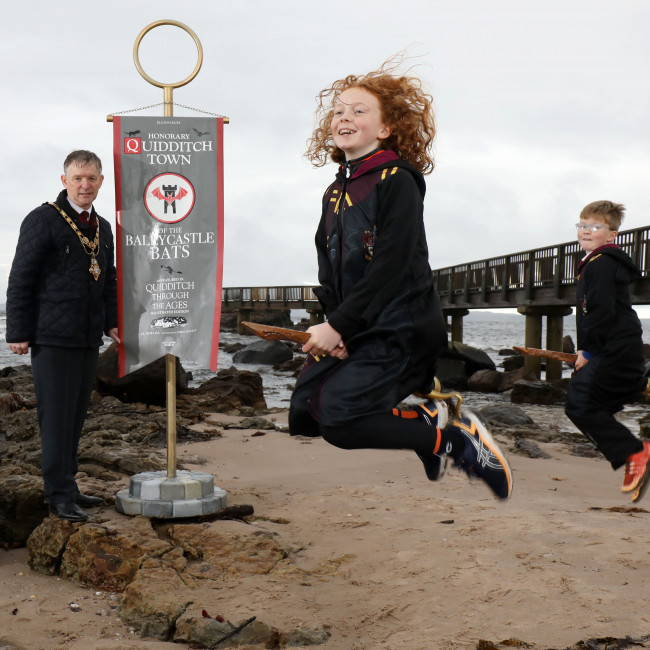 Towns and villages across Britain and Ireland are being honoured for the release of the new book 'Quidditch Through the Ages'.

The book – written by J.K Rowling and illustrated by Emily Gravett - is an essential companion to the 'Harry Potter' series and gives readers guidance on the wizard's favourite sport.

Bloomsbury Publishing is presenting towns featured in the Quidditch league with decorative banners based on Quidditch goal hoops and celebrating their fictional teams.

The banners will be presented at mayoral ceremonies and socially-distanced celebrations across the country. The first celebrations took part at Ballycastle Beach (Ballycastle Bats) and Pendennis Castle, Falmouth (Falmouth Falcons).

A spokesperson for Bloomsbury Publishing said: "We’re really proud to hold these ceremonies in towns and villages across the United Kingdom and Ireland. Quidditch captured the imaginations of children and adults across the world, and the new book Quidditch Through the Ages, beautifully illustrated by Emily Gravett, is a magical companion for those who want to immerse themselves in the wizarding world of Harry Potter.

"'Harry Potter' fans can now unearth the real-life towns and villages inspiring the names of Quidditch teams but we ask anyone planning a visit to these locations to first check national and local travel guidance on coronavirus to ensure their visit is made safely. For communities that are currently experiencing stricter measures, we encourage people to support their favourite Quidditch team virtually by visiting the official Harry Potter fan club, Wizarding World."

The eleven honorary Quidditch towns receiving the banners are: