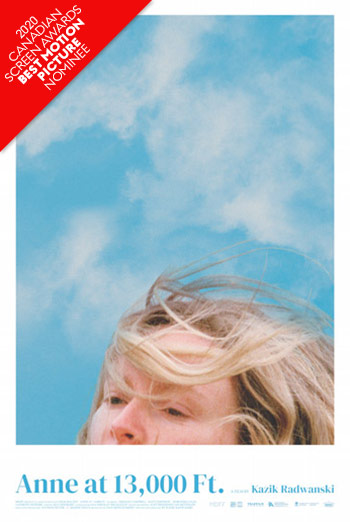 Anne (Deragh Campbell, I Used To Be Darker) has a seemingly ordinary and stable life as a single daycare worker in Toronto. But after an overwhelming skydiving trip for her best friend Sara's bachelorette party, the ground shifts beneath Anne's feet. She starts to bring a care-free joyfulness to her conservative job, the effects of which spill over into her personal life. At Sara's wedding, Anne meets Matt (Matt Johnson, Operation Avalanche) who takes to her offbeat, confrontational charms, but she soon finds herself pushing the limits of what's socially acceptable. Anne at 13,000 ft is a rigorous, volatile portrait of a young woman struggling to come down to earth, from director Kazik Radwanski (Tower, which premiered at the Locarno Film Festival; How Heavy This Hammer, Berlin International Film Festival; Scaffold, New York Film Festival) and Toronto's acclaimed MDFF filmmaking collaborative.