The Lord Of The Rings: The Fellowship Of The Ring Cast Reunion Trailer 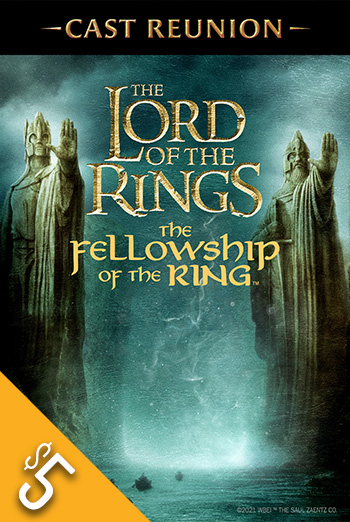 To honour the twentieth anniversary of THE LORD OF THE RINGS Trilogy and the release of a gorgeous 4K remastering overseen by Peter Jackson, Middle-earth’s finest are reuniting for THE LORD OF THE RINGS Cast Reunion – three exclusive special post-screening conversations hosted by noted Ring-Nut and host of The Late Show on CBS, Stephen Colbert. Joining Colbert will be Elijah Wood, Sean Astin, Billy Boyd and Dominic Monaghan.

In the first part of J.R.R. Tolkien's epic masterpiece, The Lord of the Rings, a shy young hobbit named Frodo Baggins inherits a simple gold ring. He knows the ring has power, but not that he alone holds the secret to the survival--or enslavement--of the entire world.
Now Frodo, accompanied by a wizard, an elf, a dwarf, two men and three loyal hobbit friends, must become the greatest hero the world has ever known to save the land and the people he loves.