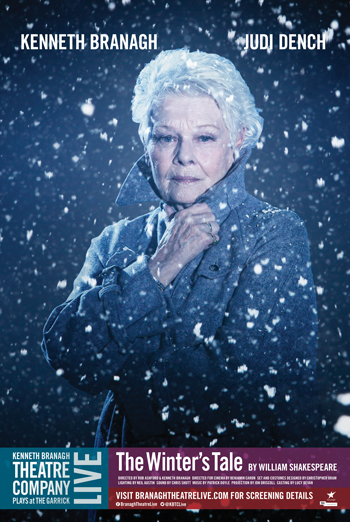 The first season of the Kenneth Branagh Theatre Company Live promises an exceptional series of plays broadcast to cinemas from London’s Garrick Theatre over the course of a year. The season begins with The Winter’s Tale. Shakespeare's timeless tragicomedy of obsession and redemption is reimagined in a new production co-directed by Rob Ashford and Kenneth Branagh, following their triumphant staging of Macbeth in Manchester and Manhattan. King Leontes appears to have everything: power, wealth, a loving family and friends. But sexual jealousy sets in motion a chain of events with tragic consequences... The Winter’s Tale will star a remarkable group of actors,featuring Judi Dench as Paulina, alongside Tom Bateman (Florizel), Jessie Buckley (Perdita), Hadley Fraser (Polixenes), Miranda Raison (Hermione) and Kenneth Branagh as Leontes.